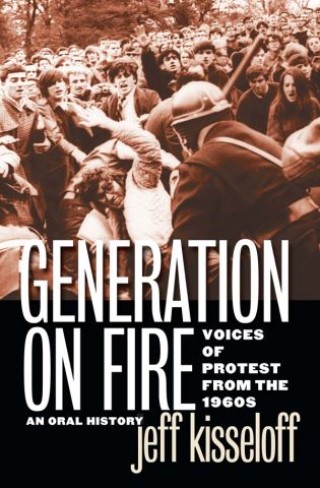 Voices of Protest from the 1960s, An Oral History

The political and cultural upheaval of the '60s has become a subject blighted by misconceptions and stereotypes. To many, it is synonymous with widespread drug abuse, failed social experiments, and general irresponsibility. Despite sustained public interest, few remember that many of the freedoms and rights Americans enjoy today are the direct result of those who defied the established order during this tumultuous period. It was an era that challenged both mainstream and elite American notions of how politics and society should function. In Generation on Fire, Jeff Kisseloff's continuing work in oral history, witnesses speak about their motives and actions during the 1960s through the present. Kisseloff provides an eclectic and highly personal account of the political and social activity of the decade. Among other things, the book offers firsthand accounts of what it was like to face a mob's wrath in the segregated South and to survive the jungles of Vietnam. It takes readers inside the courtroom of the Chicago Eight and into a communal household in Vermont. From the stage at Woodstock to the playing fields of the NFL and finally to a fateful confrontation at Kent State, Generation on Fire brings the '60s alive again. In this riveting collection of never-before published interviews, Generation on Fire unapologetically contextualizes the world of the 1960s, illuminating the ingrained social and cultural obstacles facing those working for change as well as the courage and shortcomings of those who defied "acceptable" conventions and mores. Sometimes tragic, sometimes hilarious, the stories in this volume celebrate the passion, courage, and independent thinking that led a generation to believe change for the better was possible.