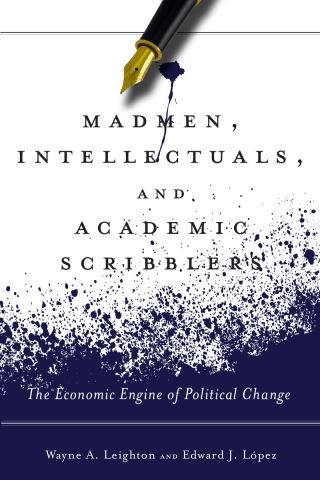 The Economic Engine of Political Change

Madmen, Intellectuals, and Academic Scribblers presents a simple, economic framework for understanding the systematic causes of political change. Wayne A. Leighton and Edward J. López take up three interrelated questions: Why do democracies generate policies that impose net costs on society? Why do such policies persist over long periods of time, even if they are known to be socially wasteful and better alternatives exist? And, why do certain wasteful policies eventually get repealed, while others endure? The authors examine these questions through familiar policies in contemporary American politics, but also draw on examples from around the world and throughout history. Assuming that incentives drive people's decisions, the book matches up three key ingredients—ideas, rules, and incentives—with the characters who make political waves: madmen in authority (such as Franklin Delano Roosevelt and Margaret Thatcher), intellectuals (like Jon Stewart and George Will), and academic scribblers (in the vein of Friedrich Hayek and John Maynard Keynes). Political change happens when these characters notice holes in the structure of ideas, institutions, and incentives, and then act as entrepreneurs to shake up the status quo.