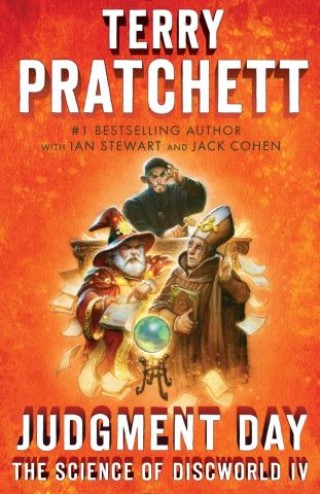 Science of Discworld IV: A Novel

The wizards of Unseen University are again called upon to defend their creation, Roundworld, this time in a courtroom—where its very existence hangs in the balance.

The Omnians fervently believe that the world is round, not flat, and view the discovery of Roundworld as a vindication of their faith. To leave this artifact in the hands of the wizards would be unacceptable. Not only do the academics hold that Discworld is flat, but by creating the Roundworld universe, they have elevated themselves to the level of gods. Ankh-Morpork’s venerable tyrant Lord Vetinari agrees to a tribunal, where the wizards Ridcully, Rincewind, and Ponder Stibbons can present their case—with key assistance from a Roundworld librarian named Marjorie Daw.

JUDGMENT DAY weaves together explorations of such Earthly topics as big science, creation, subatomic particles, the existence of dark matter, and the psychology of belief--a treat for Discworld fans and readers of popular science alike.

Terry Pratchett: SIR TERRY PRATCHETT is the acclaimed creator of the bestselling Discworld series. He was appointed OBE and a Knight Bachelor in recognition of his services to literature. He died in 2015.

IAN STEWART is a Fellow of the Royal Society, a professor of mathematics at the University of Warwick, and the author of numerous books on math and popular science, as well as science fiction novels co-authored with Jack Cohen.

JACK COHEN is a professor of biology and an honorary professor of mathematics at the University of Warwick, and has co-authored several books with Ian Stewart.