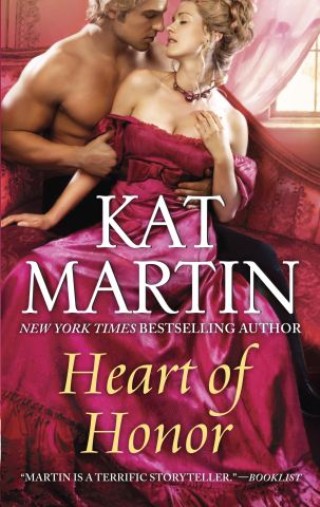 As publisher of the weekly London ladies’ gazette Heart to Heart, Krista Hart is known for her outspoken views on such unpopular issues as social reform—risking her reputation and her very safety with every controversial article. She refuses to be intimidated, although she knows full well it makes her the target of angry opposition.

When she encounters a powerful Viking descendant imprisoned as a local sideshow attraction, Krista angrily demands his release. Although she tells herself that freeing Leif Draugr is simply the right thing to do, she can’t deny being attracted to the fierce Nordic chieftain, especially after her father transforms him into a “proper” English gentleman.

But as anonymous threats against Krista become more and more aggressive, it is Leif who must face the enemies desperate to silence her, even as they push her closer into the embrace of a warrior prepared to do whatever it takes to make her his.

Kat Martin: Top ten New York Times bestselling author Kat Martin is a graduate of the University of California Santa Barbara.  Residing with her Western-author husband, L.J. Martin, in Missoula, Montana, Kat has written 70 Historical and Contemporary Romantic Suspense novels. More than 17 million of her books are in print and she has been published in twenty foreign countries. Kat is currently hard at work on her next novel.