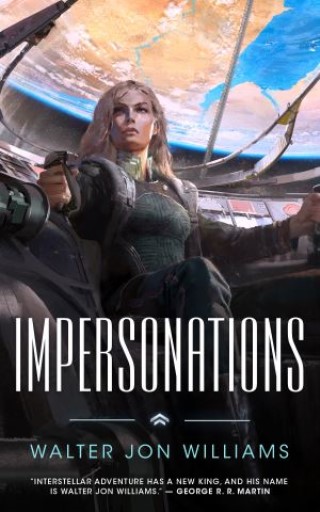 A Story of the Praxis

Having offended her superiors by winning a battle without permission, Caroline Sula has been posted to the planet Earth, a dismal backwater where careers go to die. But Sula has always been fascinated by Earth history, and she plans to reward herself with a long, happy vacation amid the ancient monuments of humanity's home world.

Sula may be an Earth history buff, but there are aspects of her own history she doesn't want known. Exposure is threatened when an old acquaintance turns up unexpectedly. Someone seems to be forging evidence that would send her to prison. And all that is before someone tries to kill her.

If she's going to survive, Sula has no choice but to make some history of her own.

"Well told with story plot, well-drawn characters, and excellent wordsmithing...It feels like Williams is having a great time with Impersonations." — Locus

"Readers will savor this intriguing glimpse into the life of a woman who struggles with her own identity and the price of her action." — Publishers Weekly

WALTER JON WILLIAMS is an award-winning author who has been listed on the bestseller lists of the New York Times and the Times of London. He is the author of more than two dozen novels and collections of short fiction.

His first novel to attract serious public attention was Hardwired (1986), described by Roger Zelazny as a tough, sleek juggernaut of a story, punctuated by strobe-light movements, coursing to the wail of jets and the twang of steel guitars. In 2001 he won a Nebula Award for his novelette, Daddy's World, and won again in 2005 for The Green Leopard Plague.