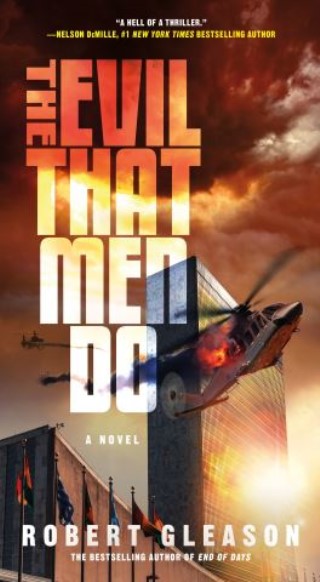 The Evil That Men Do

Robert Gleason brings his A-game to The Evil That Men Do, a terrorism thriller steeped with equal parts terror and wit

Income inequality and the offshore hoarding of illicit black funds have reached such extremes that the earth’s democracies are in peril. The oligarchs are taking over. The People worldwide, however, are rising up, and they demand that the UN seize and redistribute all that illegal filthy lucre. But it will not be easy. The world’s oligarchs will not go gentle.

Mikhail Putilov, Russia’s strongman; J. T. Tower, the American president, and Wahid al-Waheed, the Saudi Ambassador to the US will do anything to stop and destroy this global expropriation moment—even if it means nuking the UN. Only three people can stop them: the crusading, muckraking, investigative journalist, Jules Meredith; ex-CIA agent, Elena Moreno; and her boyfriend, the ex-Special Forces Operative turned cybersecurity billionaire, John C. Jameson. If these three fail, democracies around the world will die; and the Age of the Great Global Oligarchs will begin.

If these the three friends fail, the nuclear fireballs will blaze, the UN will burn, and a New Dark Ages will ensue. People everywhere must hold their breath and wait.

Robert Gleason: ROBERT GLEASON is a highly regarded expert on nuclear terrorism. He's spoken on the topic at Harvard four times, and on the Sean Hannity and Lou Dobbs TV shows, and also starred in a two-hour History Channel special largely devoted to the subject. He has discussed it on George Noory's Coast to Coast AM, NPR, and many other shows. Gleason is the author of And Into the Fire, The Nuclear Terrorist, and End of Days. New York City named a day after him for his work in prison literacy, and he was instrumental in getting the 86-year-old anti-nuclear nun, Sister Megan Rice, out of prison. He lives in New York City. His website is www.RobertGleasonBooks.com.