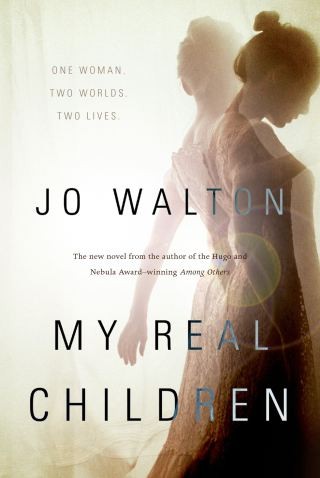 Her childhood, her years at Oxford during the Second World War-those were solid things. But after that, did she marry Mark or not? Did her friends all call her Trish, or Pat? Had she been a housewife who escaped a terrible marriage after her children were grown, or a successful travel writer with homes in Britain and Italy? And the moon outside her window: does it host a benign research station, or a command post bristling with nuclear missiles?

Two lives, two worlds, two versions of modern history; each with their loves and losses, their sorrows and triumphs. Jo Walton's My Real Children is the tale of both of Patricia Cowan's lives...and of how every life means the entire world.

JO WALTON won the John W. Campbell Award for Best New Writer in 2002, and the World Fantasy Award for her novel Tooth and Claw in 2004. Her several other novels include the acclaimed Small Change alternate-history trilogy, comprising Farthing, Ha'penny, and Half a Crown. Her novel Among Others won the Hugo and Nebula Awards in 2012. She is a columnist on Tor.com. A native of Wales, she lives in Montreal.