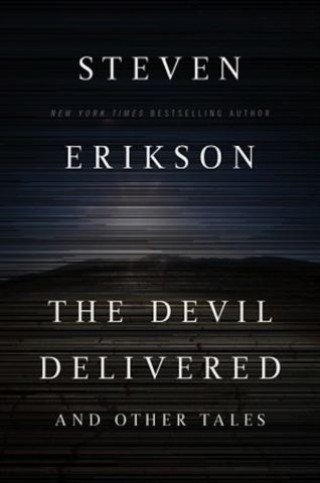 The Devil Delivered and Other Tales

Steven Erikson has carved a name for himself among the pantheon of great fantasy writers. But his masterful storytelling and prose style go beyond the awe-inspiring Malazan world. In The Devil Delivered and Other Tales, Erikson tells three different, but captivating stories:

"The Devil Delivered" tells a story set within the near future, where the land owned by the great Lakota Nation blisters beneath an ozone hole the size of the Great Plains. As the natural world falls victim to its wrath, and scientists scramble to understand it, a lone anthropologist wanders the deadlands, recording observations that threaten to bring the entire world to its knees.

"Revolvo" takes place in an alternate Earth where evolution took an interesting turn and the arts scene is ruled by technocrats who thrive in a secret, nepotistic society of granting agencies, bursaries, and peer-review boards, all designed to permit self-proclaimed artists to survive without an audience.

"Fishin' with Grandma Matchie" is told in the voice a nine-year-old boy, writing the story of his summer vacation. What starts as a typical recount of a trip to see Grandma quickly becomes a stunning fantastical journey into imagination and perception in the wild world that Grandma Matchie inhabits.

Steven Erikson: Archaeologist and anthropologist Steven Erikson's debut novel, Gardens of the Moon, was shortlisted for the World Fantasy Award. His New York Times bestselling series, 'The Malazan Book of the Fallen, has been hailed as a masterpiece of epic fantasy. He lives in Cornwall.