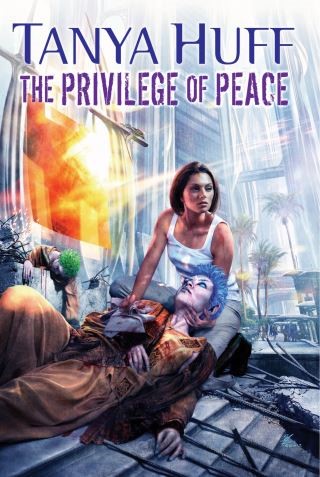 The Privilege of Peace

Former space marine Torin Kerr returns for one final adventure to save the Confederation in the last book in the military science fiction Peacekeeper trilogy.

Warden Torin Kerr has put her past behind her and built a life away from the war and everything that meant. From the good, from the bad. From the heroics, from the betrayal. She's created a place and purpose for others like her, a way to use their training for the good of the Confederation. She has friends, family, purpose.

Unfortunately, her past refuses to grant her the same absolution. Big Yellow, the ship form of the plastic aliens responsible for the war, returns. The Silsviss test the strength of the Confederation. Torin has to be Gunnery Sergeant Kerr once again and find a way to keep the peace.

Tanya Huff: Tanya Huff may have left Nova Scotia at three, and has lived most of her life since in Ontario, but she still considers herself a Maritimer. On the way to the idyllic rural existence she shares with her partner Fiona Patton, six cats, and a chihuahua, she acquired a degree in Radio and Television Arts from Ryerson Polytechnic—an education she was happy to finally use while writing her recent Smoke novels. Of her previous twenty-three books, the five—Blood Price, Blood Trail, Blood Lines, Blood Pact, Blood Debt—featuring Henry Fitzroy, bastard son of Henry VIII, romance writer, and vampire are among the most popular. Tanya can be found via Twitter at @TanyaHuff.