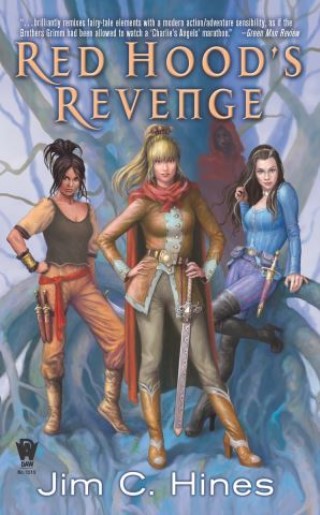 Wars may end. But vengeance is forever.

Roudette's story was a simple one. A red cape. A wolf. A hunter. Her mother told her she would be safe, so long as she kept to the path. But sometimes the path leads to dark places. Roudette is the hunter now, an assassin known throughout the world as the Lady of the Red Hood. Her mission will take her to the country of Arathea and an ancient fairy threat. At the heart of the conflict between humans and fairies stands the woman Roudette has been hired to kill, the only human ever to have fought the Lady of the Red Hood and survived-the princess known as Sleeping Beauty.

Jim C. Hines: Jim C. Hines has been a paid juggler, earned a black belt in two different martial arts, performed yo-yo tricks at the top of the Eiffel Tower, and lived with a brain-damaged squirrel. (Only three of those are true.) One of his earliest stories earned first place in the Writers of the Future contest. He’s published more than forty short stories as well as numerous fantasy novels, including the humorous Jig the Dragonslayer trilogy, the Princess series, which re-imagines traditional fairy-tale princesses as butt-kicking action heroines, and the Magic Ex Libris series, about a centuries-old secret society dedicated to the use and control of book magic. In 2012, he won the Hugo for Best Fan Writer. Jim lives in Michigan with his wife, two children, and an unstable number of pets. He can be found online at www.jimchines.com.