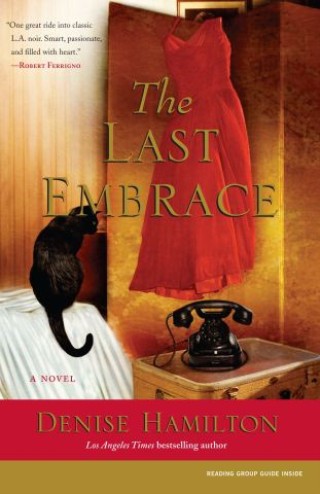 Lily Kessler, a former stenographer and spy for the OSS, comes to Los Angeles to find her late fiancé's sister Kitty, an actress who is missing from her Hollywood boardinghouse. The next day, Kitty's body is found in a ravine below the Hollywood sign. Unimpressed by the local police, Lily investigates on her own. As she delves into Kitty's life, she encounters fiercely competitive starlets, gangsters, an eccentric special-effects genius, exotic denizens of Hollywood's nightclubs, and a homicide detective who might distract her from her quest for justice. But the landscape in L.A. can shift kaleidoscopically, and Lily begins to see how easily a young woman can lose her balance and fall prey to the alluring city's dangers....

With vibrant characters and unerring insight into the desires and dark impulses that can flare between men and women, The Last Embrace showcases Denise Hamilton at the height of her storytelling powers as she transports readers to a fascinating, transitional time in one of America's most beguiling cities.

Denise Hamilton: Denise Hamilton is a writer-journalist whose work has appeared in the Los Angeles Times, Cosmopolitan, and The New York Times and is the author of five acclaimed Eve Diamond crime novels, Prisoner of Memory, Savage Garden, Last Lullaby, Sugar Skull, and The Jasmine Trade, all of which have been Los Angeles Times bestsellers. She is also the editor of and a contributor to the short story anthology Los Angeles Noir, winner of the Southern California Independent Booksellers Association Award for Best Mystery of 2007. She lives in Los Angeles with her husband and two young children. Visit her at www.denisehamilton.com.