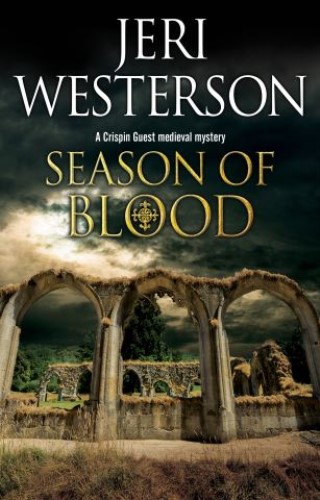 1390. Hailes Abbey, Gloucestershire, England. Two monks lie murdered, their Holy Blood relic stolen: a relic that is said to run liquid for the sinless and remain stubbornly dry for the sinner. Unwilling to become involved in a bitter dispute between a country monastery and Westminster Abbey, the disgraced former knight Crispin Guest attempts to return the relic to Hailes where it belongs, but somehow it keeps returning to his hands no matter what.

As he tries to shield a former nemesis from a charge of murder while becoming entangled with a mysterious and beautiful woman caught between Church politics and the dangerous intrigues of King Richard's court, Crispin begins to suspect that someone at Westminster is conspiring with the assassins. Can the Blood of Christ point to the killer?

Jeri Westerson: Jeri Westerson was born and raised in Los Angeles. As well as nine previous Crispin Guest medieval mysteries, she is the author of a paranormal urban fantasy series and several historical novels. Her books have been nominated for the Shamus, the Macavity and the Agatha awards.