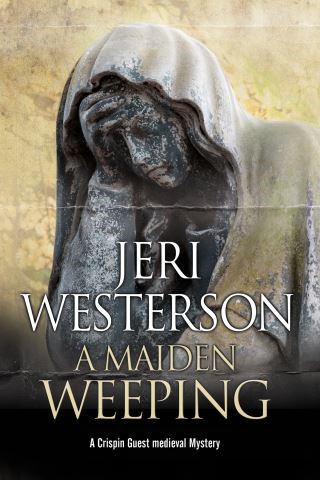 When Crispin Guest finds himself trapped in circumstances outside his control, he must rely on the wits of his young apprentice, Jack Tucker, to do the rescuing.

Crispin awakens in a strange bed after a night of passion when he finds a woman dead, murdered. Drunk, Crispin scarcely remembers the night before. Did he kill her? But when other young women turn up dead under similar circumstances, he knows there is a deadly stalker loose in London. Could it have to do with the mysterious Tears of the Virgin Mary kept under lock and key by a close-lipped widow, a relic that a rival family would kill to get their hands on? What does this relic, that forces empathy on all those surrounding it, have to do with murder for hire?

With Crispin shackled and imprisoned by the immutable sheriffs who would just as soon see him hang than get to the real truth, Jack hits the ground running and procures the help of a fresh young lawyer to help them solve the crime.

Jeri Westerson: Jeri Westerson was born and raised in Los Angeles. As well as seven previous Crispin Guest medieval mysteries, she is the author of a paranormal urban fantasy series and several historical novels. Her books have been nominated for the Shamus, the Macavity and the Agatha awards.