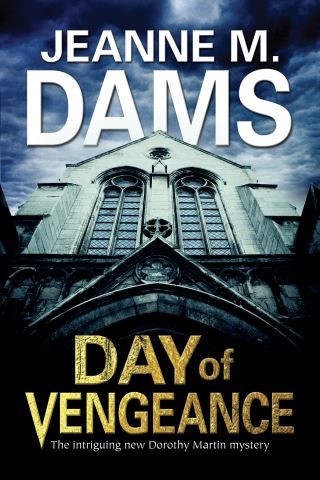 Dorothy Martin’s husband, Alan Nesbitt, is heavily involved in the complex and lengthy process of choosing a new bishop for Sherebury Cathedral. The very day that the short list is announced publicly, one of the candidates is found murdered in his own church. With a long list of possible suspects, including Alan himself, Dorothy and Alan start to delve into the history of the victim, hoping to find some clue to a motive for murder.

Then a second candidate is found dead, and the case becomes very complicated indeed. Who is murdering England’s clergymen and why . . .?

Jeanne M. Dams: Jeanne M. Dams, an American, is a devout Anglophile who has wished she could live in England ever since her first visit in 1963. Fortunately, her alter ego, Dorothy Martin, can do just that. Jeanne lives in South Bend, Indiana, with a varying population of cats.