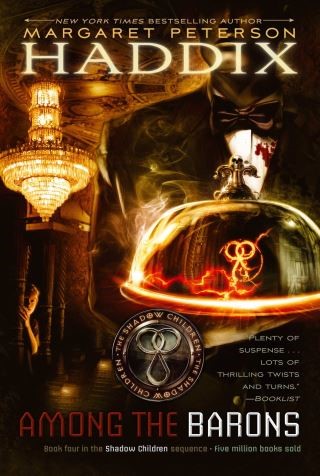 In this fourth installment of a series about a society that allows only two children per family, Luke Garner is finally adjusting to his new life at Hendricks School as Lee Grant. While the Grants belong to the highest class of society called the Barons, Luke avoids snobbish affectations and befriends his classmates, who are also illegal thirds. When the real Lee Grant's younger brother arrives at the school, along with his fierce body guard, Luke worries that Smits will expose him to the government. However, Smits has come to enlist Luke's help in discovering how his older brother really died, suspecting that he was murdered. The intrigue and danger grow more acute when both boys are called "home" and Luke discovers that the Grants have plans for him that could turn out to be fatal.

Margaret Peterson Haddix: Margaret Peterson Haddix is the author of many critically and popularly acclaimed YA and middle grade novels, including the Children of Exile series, The Missing series, the Under Their Skin series, and the Shadow Children series. A graduate of Miami University (of Ohio), she worked for several years as a reporter for The Indianapolis News. She also taught at the Danville (Illinois) Area Community College. She lives with her family in Columbus, Ohio. Visit her at HaddixBooks.com.