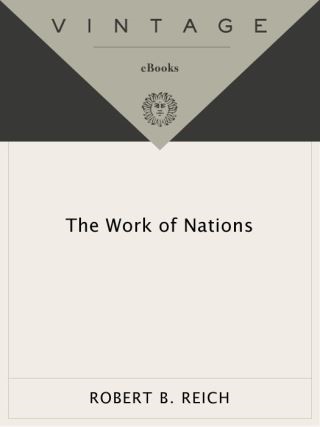 The Work of Nations

Preparing Ourselves for 21st Century Capitalis

There is no longer such a thing as an American economy, say Robert Reich at the beginning of this brilliant book.  What does it mean to be a nation when money, goods, and services know no borders?  What skills will be the most valuable in the coming century? And how can our country best ensure that all its citizen have a share in the new global economy?  Robert B. Reich, the widely respected and bestselling author of The Next American Frontier and The Resurgent Liberal, defines the real challenge facing the United States in the 21st century in this trail-blazing book.  Original, readable, and vastly informed, The Work of Nations is certain to set a standard for the next generation of policy-makers.

Currently Secretary of Labor in the Clinton Administration, Robert Reich is a member of the faculty of Harvard’s John F. Kennedy School of Government and one of America's foremost political economists.  A graduate of Dartmouth College, Yale Law School, and Oxford University, he served as Assistant to the Solicitor General in the Ford administrations and Director of Policy Planning for the Federal Trade Commission in the Carter administration.  He is a contributing editor of The New Republic, chairman of the editorial board of The American Prospect, a frequent contributor to the Harvard Business Review and The Atlantic, and a regular commentator for both National Public Radio, and public television.  He is the author of The Resurgent Liberal, Tales of a New America, New Deals: The Chrysler Revival and the American System, The Next American Frontier, Minding America's Business, and other books.  Reich lives in Cambridge, Massachusetts, with his wife and two sons.