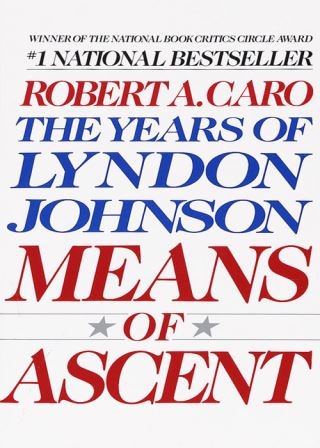 The Years of Lyndon Johnson II

Here, Johnson’s almost mythic personality—part genius, part behemoth, at once hotly emotional and icily calculating—is seen at its most nakedly ambitious. This multifaceted book carries the President-to-be from the aftermath of his devastating defeat in his 1941 campaign for the Senate-the despair it engendered in him, and the grueling test of his spirit that followed as political doors slammed shut-through his service in World War II (and his artful embellishment of his record) to the foundation of his fortune (and the actual facts behind the myth he created about it).

The culminating drama—the explosive heart of the book—is Caro’s illumination, based on extraordinarily detailed investigation, of one of the great political mysteries of the century. Having immersed himself in Johnson’s life and world, Caro is able to reveal the true story of the fiercely contested 1948 senatorial election, for years shrouded in rumor, which Johnson was not believed capable of winning, which he “had to” win or face certain political death, and which he did win-by 87 votes, the “87 votes that changed history.”

Telling that epic story “in riveting and eye-opening detail,” Caro returns to the American consciousness a magnificent lost hero. He focuses closely not only on Johnson, whom we see harnessing every last particle of his strategic brilliance and energy, but on Johnson’s “unbeatable” opponent, the beloved former Texas Governor Coke Stevenson, who embodied in his own life the myth of the cowboy knight and was himself a legend for his unfaltering integrity. And ultimately, as the political duel between the two men quickens—carrying with it all the confrontational and moral drama of the perfect Western—Caro makes us witness to a momentous turning point in American politics: the tragic last stand of the old politics versus the new—the politics of issue versus the politics of image, mass manipulation, money and electronic dazzle.

Robert A. Caro:    For his biographies of Robert Moses and Lyndon Johnson, Robert A. Caro has twice won the Pulitzer Prize for Biography, twice won the National Book Critics Circle Award for Best Nonfiction Book of the Year, and has also won virtually every other major literary honor, including the National Book Award, the Gold Medal in Biography from the American Academy of Arts and Letters, and the Francis Parkman Prize, awarded by the Society of American Historians to the book that best "exemplifies the union of the historian and the artist."

To create his first book, The Power Broker: Robert Moses and the Fall of New York, Caro spent seven years tracing and talking with hundreds of men and women who worked with, for, or against Robert Moses, including a score of his top aides.  He examined mountains of files never open to the public.  Everywhere acclaimed as a modern classic, The Power Broker was chosen by the Modern Library as one of the hundred greatest non-fiction books of the twentieth century. It is, according to David Halberstam, "Surely the greatest book ever written about a city." And The New York times Book Review said: "In the future, the scholar who writes the history of American cities in the twentieth century will doubtless begin with this extraordinary effort."

To research The Years of Lyndon Johnson, Caro and his wife, Ina, moved from his native New York City to the Texas Hill Country and then to Washington, D.C., to live in the locales in which Johnson grew up and in which he built, while he was still young, his first political machine.  He has spent years examining documents at the Johnson Library in Austin and interviewing men and women connected with Johnson's life, many of whom had never before been interviewed. The first volume of The Years of Lyndon Johnson, The Path to Power, was cited by The Washington Post as "proof that we live in a great age of biography... [a book] of radiant excellence... Caro's evocation of the Texas Hill Country, his elaboration of Johnson's unsleeping ambition, his understanding of how politics actually work, are—let  it be said flat out—at the summit of American historical writing." Professor Henry F. Graff of Columbia University called the second volume, Means of Ascent, "brilliant.  No review does justice to the drama of the story Caro is telling, which is nothing less than how present-day politics was born."  And the London Times hailed volume three, Masters of the Senate, as "a masterpiece... Robert Caro has written on of the truly great political biographies of the modern age."

"Caro has a unique place among American political biographers," according to The Boston Globe.  "He has become, in many ways, the standard by which his fellows are measured."  And Nicholas von Hoffman wrote: "Caro has changed the art of political biography."

Caro graduated from Princeton University and later became a Nieman Fellow at Harvard University.  He lives in New York City with his wife, Ina, an historian and writer.