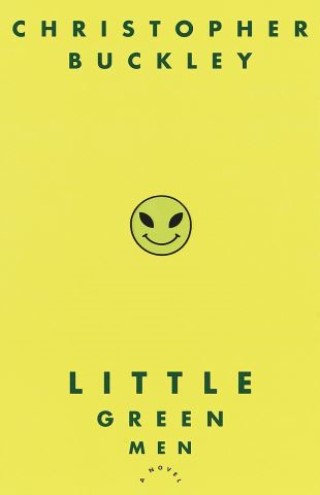 In 1994, Christopher Buckley published one of the most acclaimed and successful comic novels of the decade, Thank You for Smoking. Now Buckley returns to the strange land of Washington, D.C., in Little Green Men, a millennial comedy of manners about aliens and pundits . . . and how much they have in common.

The reluctant hero of this hilarious novel is John Oliver Banion, a stuffy Washington talk-show host, whose privileged life is thrown into upheaval when aliens abduct him from his exclusive country-club golf course.

But were his gray-skinned captors aliens . . . or something far more sinister? After Banion is abducted again--this time in Palm Springs--he believes he has been chosen by the extraterrestrials to champion the most important cause of the millennium, and he embarks on a crusade, appearing before a convention of UFO believers and demanding that Congress and the White House seriously investigate UFOs. His friends and family suspect that Banion is having some kind of manic-depressive midlife crisis and urge him to seek therapy before his credibility as a pillar of the punditocracy is ruined.

So John Oliver Banion must choose: keep his establishment status or become the leader of millions of impassioned and somewhat scruffy new friends who want to expose the government's secret alien agenda.

Little Green Men proves once and for all that the truth is out there. Way out there. And it reaffirms Christopher Buckley's status as the funniest humanoid writer in the universe.


Coming soon from Christopher Buckley:   One of Our Whales Is Missing

Christopher Buckley: Christopher Buckley is a novelist, essayist, humorist, critic, magazine editor, and memoirist. His books have been translated into sixteen foreign languages. He worked as a merchant seaman and White House speechwriter. He has written for many newspapers and magazines and has lectured in more than seventy cities around the world. He was awarded the Thurber Prize for American Humor and the Washington Irving Medal for Literary Excellence.