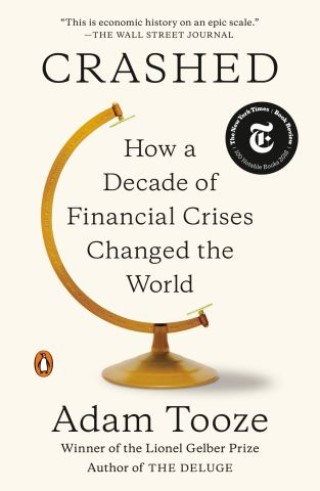 How a Decade of Financial Crises Changed the World

"An intelligent explanation of the mechanisms that produced the crisis and the response to it...One of the great strengths of Tooze's book is to demonstrate the deeply intertwined nature of the European and American financial systems."--The New York Times Book Review

From a prizewinning economic historian, an eye-opening reinterpretation of the 2008 economic crisis (and its ten-year aftermath) as a global event that directly led to the shockwaves being felt around the world today.

We live in a world where dramatic shifts in the domestic and global economy command the headlines, from rollbacks in US banking regulations to tariffs that may ignite international trade wars. But current events have deep roots, and the key to navigating today’s roiling policies lies in the events that started it all—the 2008 economic crisis and its aftermath. Despite initial attempts to downplay the crisis as a local incident, what happened on Wall Street beginning in 2008 was, in fact, a dramatic caesura of global significance that spiraled around the world, from the financial markets of the UK and Europe to the factories and dockyards of Asia, the Middle East, and Latin America, forcing a rearrangement of global governance. With a historian’s eye for detail, connection, and consequence, Adam Tooze brings the story right up to today’s negotiations, actions, and threats—a much-needed perspective on a global catastrophe and its long-term consequences.

Adam Tooze: Adam Tooze is the author of Wages of Destruction, winner of the Wolfson and Longman History Today Prize. He is the Kathryn and Shelby Cullom Davis Professor of History at Columbia University. He formerly taught at Yale University, where he was Director of International Security Studies, and at the University of Cambridge. He has worked in executive development with several major corporations and contributed to the National Intelligence Council. He has written and reviewed for Foreign Affairs, the Financial Times, The Guardian, the Sunday Telegraph, The Wall Street Journal, Die Zeit, Sueddeutsche Zeitung, Tageszeitung and Spiegel Magazine, New Left Review, and the London Review of Books.