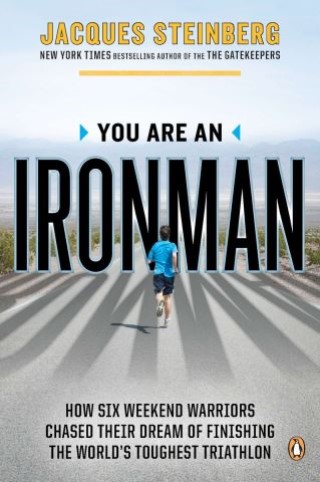 You Are an Ironman

As he did so masterfully in his New York Times bestseller, The Gatekeepers, Jacques Steinberg creates a compelling portrait of people obsessed with reaching a life-defining goal. In this instance, the target is an Ironman triathlon-a 2.4-mile open-water swim followed by a 112-mile bike ride, then finally a 26-mile marathon run, all of which must be completed in no more than seventeen hours.

Steinberg focuses not on the professionals who live off the prize money and sponsorships but on a handful of triathletes who regard the sport as a hobby. Vividly capturing the grueling preparation, the suspense of completing each event of the triathlon, and the spectacular feats of human endurance, Steinberg plumbs the physical and emotional toll as well as the psychological payoff on the participants of the Ford Ironman Arizona 2009. His You Are an Ironman is both a riveting sports narrative and a fascinating, behind-the scenes study of what makes these athletes keep going..

Jacques Steinberg: Jacques Steinberg has been a staff reporter for The New York Times for more than ten years and currently is a national education correspondent. In 1998, he was awarded the grand prize of the Education Writers Association for his nine-part series on a third-grade classroom on Manhattan's Upper West Side.