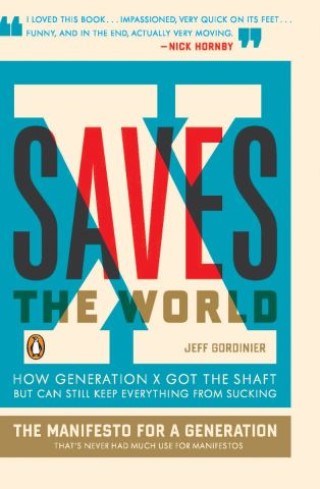 In this simultaneously hilarious and incisive "manifesto for a generation that's never had much use for manifestos," Gordinier suggests that for the first time since the "Smells Like Teen Spirit"breakthrough of the early 1990s, Gen X has what it takes to rescue American culture from a state of collapse. Over the past twenty years, the so-called "slackers"have irrevocably changed countless elements of our culture-from the way we watch movies to the way we make sense of a cracked political process to the way the whole world does business.

Jeff Gordinier: Jeff Gordinier is the author of X Saves the World and the Editor-at-Large at Details magazine. He lives in the New York area and has written for a variety of publications, including the New York Times, the Los Angeles Times, Spin, Elle, Esquire, GQ, Entertainment Weekly, and PoetryFoundation.org. Nobody, including Jeff, is quite sure of how to pronounce his last name.