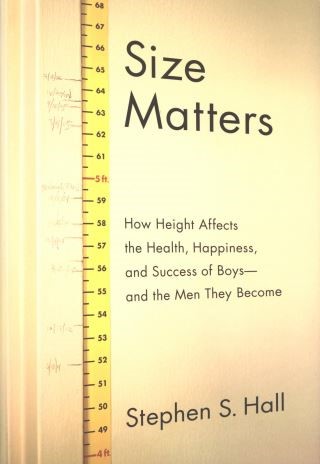 How Height Affects the Health, Happiness, and Success of Boys - and the Men They Become

An award-winning journalist tackles the hot topic of male body image and shows how physical size during childhood affects our psychology, social status, relationships, and income as adults.

With a mix of fresh research, incisive reportage, and bracing candor, Size Matters traces the surprising history of society’s bias against shortness and reveals how short people can and do thrive in spite of this insidious bigotry. Drawing on his own childhood experiences (he was shorter than 99 percent of boys his age), Stephen Hall explains the evolution of the growth chart, the biology of childhood aggression, and the wrenching phenomenon of bullying. He explores the factors that determine why one child’s small stature may lead to anguish while another short child develops an emotional resilience that will enrich his later life. Weaving together recent findings from the fields of animal behavior, psychology, and evolutionary biology, Hall assesses the role of physical size in mating success and argues that the alpha male may not be king of the mountain after all.
Hall also pinpoints the social forces that create and cash in on our anxieties about size, from bulked-up superhero action figures to pharmaceutical companies selling growth hormone to increase a child’s height -- at a cost of up to $40,000 a year. He introduces us to families who have agonized over whether to make that huge investment. He explains new research showing that a person’s height as a teenager has lifelong psychological consequences. He even tracks down kids he bullied in elementary school and kids who bullied him in high school to show that these childhood encounters have lasting effects on our adult lives. Along the way, Hall builds a persuasive case against societal attitudes that make size (or any difference) matter and argues forcefully that being short has psychological, social, and biological advantages. Size Matters will raise the consciousness -- and the spirits -- of any short male and anyone who cares about him.

Stephen S. Hall:
STEPHEN S. HALL is the author of Merchants of Immortality and three other acclaimed works of science reportage. He writes frequently for the New York Times Magazine, Discover, and other magazines. He is 5’53&#8260;4” and lives in Brooklyn, New York, with his 5’9” wife and their two average-size children.