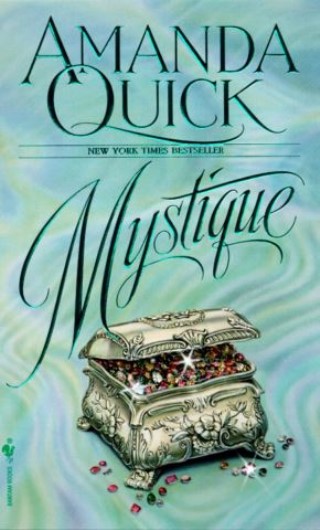 A tantalizing tale of a legendary knight and a headstrong lady whose daring quest for a mysterious crystal will draw them into a whirlwind of treachery–and desire.

When the fearsome knight called Hugh the Relentless swept into Lingwood Manor like a storm, everyone cowered–except Lady Alice. Sharp-tongued and unrepentant, the flame haired beauty believed Sir Hugh was not someone to dread but the answer to her dreams. She knew he had come for the dazzling green crystal, knew he would be displeased to find that it was no longer in her possession. Yet Alice had a proposition for the dark and forbidding knight: In return for a dowry that would free Alice and her brother from their uncle's grasp, she would lend her powers of detection to his warrior's skills and together they would recover his treasured stone. But even as Hugh accepted her terms, he added a condition of his own: Lady Alice must agree to a temporary betrothal–one that would soon draw her deep into Hugh's great stone fortress, and into a battle that could threaten their lives...and their only chance at love.

Amanda Quick: Amanda Quick, a pseudonym for Jayne Ann Krentz, is a New York Times bestselling, award-winning author of contemporary and historical romances. There are nearly thirty million copies of her books in print, including Seduction, Surrender, Scandal, Rendezvous, Ravished, Reckless, Dangerous, Deception, Desire, Mistress, Mystique, Mischief, Affair, With This Ring, I Thee Wed, and Wicked Widow. She is also the author of Slightly Shady and Don’t Look Back, the first two novels featuring Lavinia Lake and Tobias March. She makes her home in the Pacific Northwest with her husband, Frank.