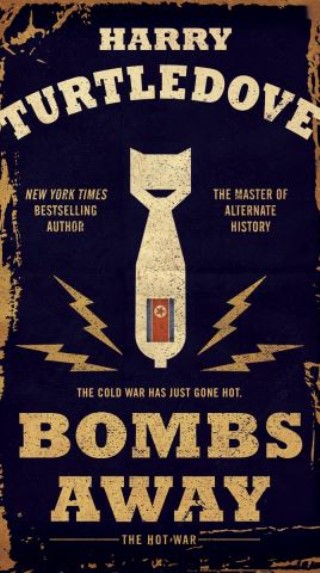 In his acclaimed novels of alternate history, Harry Turtledove has scrutinized the twisted soul of the twentieth century, from the forces that set World War I in motion to the rise of fascism in the decades that followed. Now, this masterly storyteller turns his eyes to the aftermath of World War II and asks: In an era of nuclear posturing, what if the Cold War had suddenly turned hot?

Bombs Away begins with President Harry Truman in desperate consultation with General Douglas MacArthur, whose control of the ground war in Korea has slipped disastrously away. MacArthur recognizes a stark reality: The U.S. military has been cut to the bone after victory over the Nazis—while China and the USSR have built up their forces. The only way to stop the Communist surge into the Korean Peninsula and save thousands of American lives is through a nuclear attack. MacArthur advocates a strike on Chinese targets in Manchuria. In actual history, Truman rejected his general’s advice; here, he does not. The miscalculation turns into a disaster when Truman fails to foresee Russia’s reaction.

Almost instantly, Stalin strikes U.S. allies in Europe and Great Britain. As the shock waves settle, the two superpowers are caught in a horrifying face-off. Will they attack each other directly with nuclear weapons? What countries will be caught in between?

The fateful global drama plays out through the experiences of ordinary people—from a British barmaid to a Ukrainian war veteran to a desperate American soldier alone behind enemy lines in Korea. For them, as well as Truman, Mao, and Stalin, the whole world has become a battleground. Strategic strikes lead to massive movements of ground troops. Cities are destroyed, economies ravaged. And on a planet under siege, the sounds and sights of nuclear bombs become a grim harbinger of a new reality: the struggle to survive man’s greatest madness.

Praise for Bombs Away

“A fascinating and compelling story of real people caught in forces beyond their control . . . [Harry Turtledove is] the unrivaled monarch of alternate history.”—Analog

“Turtledove is an undisputed centerpiece of the alternate-history genre, and now, to his already grand display, he’s adding the ambitious tale of a WWIII that could have happened.”—Booklist

“This is Turtledove at his best.”—SFRevu