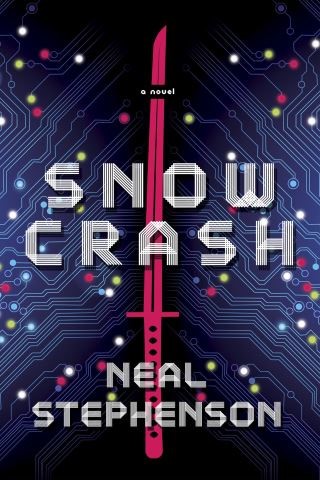 One of Time’s 100 best English-language novels • A mind-altering romp through a future America so bizarre, so outrageous, you’ll recognize it immediately

Only once in a great while does a writer come along who defies comparison—a writer so original he redefines the way we look at the world. Neal Stephenson is such a writer and Snow Crash is such a novel, weaving virtual reality, Sumerian myth, and just about everything in between with a cool, hip cybersensibility to bring us the gigathriller of the information age.

In reality, Hiro Protagonist delivers pizza for Uncle Enzo’s CosoNostra Pizza Inc., but in the Metaverse he’s a warrior prince. Plunging headlong into the enigma of a new computer virus that’s striking down hackers everywhere, he races along the neon-lit streets on a search-and-destroy mission for the shadowy virtual villain threatening to bring about infocalypse.

“[Snow Crash is] a cross between Neuromancer and Thomas Pynchon’s Vineland. This is no mere hyperbole.”—The San Francisco Bay Guardian

“Brilliantly realized . . . Stephenson turns out to be an engaging guide to an onrushing tomorrow.”—The New York Times Book Review

Neal Stephenson: Neal Stephenson issues from a clan of rootless, itinerant hardscience and engineering professors (mostly Pac-10, Big 10, and Big 8 with the occasional wild strain of Ivy). He began his higher education as a physics major, then switched to geography when it appeared that this would enable him to scam more free time on his university’s mainframe computer. When he graduated and discovered, to his perplexity, that there were no jobs for inexperienced physicist-geographers, he began to look into alternative pursuits such as working on cars, unimaginably stupid agricultural labor, and writing novels. His first novel, The Big U, was published in 1984 and vanished without a trace. His second novel, Zodiac: An Eco-Thriller, came out in 1988 and quickly developed a cult following among water-pollution-control engineers. It was also enjoyed, though rarely bought, by many radical environmentalists. Snow Crash was written in the years 1988 through 1991 as the author listened to a great deal of loud, relentless, depressing music.

Mr. Stephenson now resides in a comfortable home in the western hemisphere and spends all of his time trying to retrofit an office into its generally dark, unlevel, and asbestos-laden basement so that he can attempt to write more novels. Despite the tremendous amounts of time he devotes to writing, playing with computers, listening to speed metal, Rollerblading, and pounding nails, he is a flawless husband, parent, neighbor, and all-around human being.