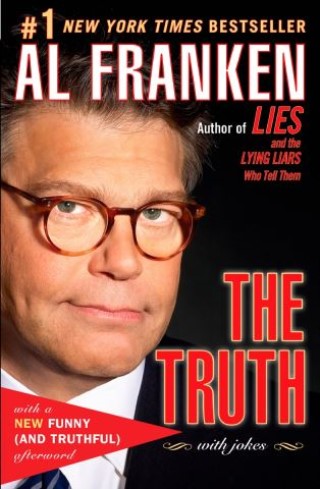 The Truth (with jokes)

The #1 New York Times bestseller by Senator Al Franken, author of Giant of the Senate

Senator Al Franken’s landmark bestseller, Lies (And the Lying Liars Who Tell Them): A Fair and Balanced Look at the Right, was praised as a “bitterly funny assault” (The New York Times) that rang “with the moral clarity of an angel’s trumpet” (The Associated Press). Now, this master of political humor strikes again with a powerful and provocative message for all of us.

In these pages, Senator Franken reveals the alarming story of how:

• Bush (barely) beat Kerry with his campaign of “fear, smear, and queers,” and then claimed a nonexistent mandate.
• “Casino Jack” Abramoff, the Republicans’ nearest and dearest friend, made millions of dollars off of the unspeakable misery of the poor and the powerless. And, also, Native Americans.
• The administration successfully implemented its strategy to destroy America’s credibility and goodwill around the world.

Complete with new material for this paperback edition, The Truth (with jokes) is more than just entertaining, intelligent, and insightful. It is at once prescient in its analysis of right-wing mendacity and incompetence, and inspiring in its vision of a better tomorrow for all Americans (except Jack Abramoff).

U.S. Senator Al Franken grew up in St. Louis Park, Minnesota. Before running for the Senate, Al spent 37 years as an Emmy award-winning comedy writer; author of I'm Good Enough, I'm Smart Enough, and Doggone It, People Like Me!, Rush Limbaugh Is a Big Fat Idiot, Lies (and the Lying Liars Who Tell Them), and Giant of the Senate; and radio talk show host. He has taken part in seven USO tours, visiting our troops overseas in Germany, Bosnia, Kosovo, Uzbekistan, Iraq, Afghanistan, and Kuwait.

First elected to the Senate in 2008, and re-elected in 2014, he currently sits on the Health, Education, Labor, and Pensions (HELP) Committee; the Judiciary Committee; the Energy and Natural Resources Committee, and the Committee on Indian Affairs. He has been married to his wife, Franni, for 40 years.