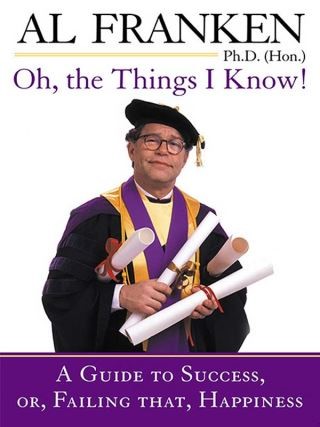 Oh, the Things I Know!

The classic New York Times bestseller by Senator Al Franken, author of Giant of the Senate

Senator Al Franken, or Dr. Al Franken, as he prefers to be called, has written the first truly indispensable book of the new millennium. Filled with wisdom, observations, and practical tips you can put to work right away, Oh, the Things I Know! is a cradle-to-grave guide to living, an easy-to-follow user's manual for human existence.

What does a megasuccess like Al Franken—bestselling author, Emmy-award winning television star, sitting U.S. Senator, and honorary Ph.D.—have to say to ordinary people like you? Well, as Dr. Al himself says, "There's no point in getting advice from hopeless failures."

Join Mr. Franken—sorry, Dr. Franken—on a journey that will take you from your first job ("Oh, Are You Going to Hate Your First Job!"), through the perils and pitfalls of your twenties and thirties ("Oh, the Person of Your Dreams vs. the Person You Can Actually Attract!"), into the joys of marriage and parenthood ("Oh, Just Looking at Your Spouse Will Make Your Skin Crawl!"), all the way to the golden years of senior citizenship ("Oh, the Nursing Home You'll Wind Up In!"). Don't travel life's lonesome highway by yourself. Take Al Franken along, if not as an infallible guide, then at least as a friend who will make you laugh.

Al Franken: U.S. Senator Al Franken grew up in St. Louis Park, Minnesota. Before running for the Senate, Al spent 37 years as an Emmy award-winning comedy writer; author of I'm Good Enough, I'm Smart Enough, and Doggone It, People Like Me!, Rush Limbaugh Is a Big Fat Idiot, Lies (and the Lying Liars Who Tell Them), and Giant of the Senate; and radio talk show host. He has taken part in seven USO tours, visiting our troops overseas in Germany, Bosnia, Kosovo, Uzbekistan, Iraq, Afghanistan, and Kuwait.

First elected to the Senate in 2008, and re-elected in 2014, he currently sits on the Health, Education, Labor, and Pensions (HELP) Committee; the Judiciary Committee; the Energy and Natural Resources Committee, and the Committee on Indian Affairs. He has been married to his wife, Franni, for 40 years.