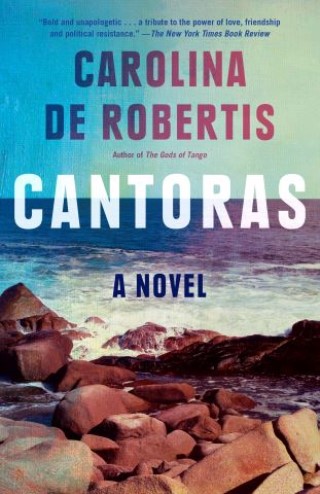 "Cantoras is a stunning lullaby to revolution—and each woman in this novel sings it with a deep ferocity. Again and again, I was lifted, then gently set down again—either through tears, rage, or laughter. Days later, I am still inside this song of a story." —Jacqueline Woodson, National Book Award–winning author

From the highly acclaimed, award-winning author of The Gods of Tango, a revolutionary new novel about five wildly different women who, in the midst of the Uruguayan dictatorship, find one another as lovers, friends, and ultimately, family.

In 1977 Uruguay, a military government crushed political dissent with ruthless force. In this environment, where the everyday rights of people are under attack, homosexuality is a dangerous transgression to be punished. And yet Romina, Flaca, Anita "La Venus," Paz, and Malena—five cantoras, women who "sing"—somehow, miraculously, find one another. Together, they discover an isolated, nearly uninhabited cape, Cabo Polonio, which they claim as their secret sanctuary. Over the next thirty-five years, their lives move back and forth between Cabo Polonio and Montevideo, the city they call home, as they return, sometimes together, sometimes in pairs, with lovers in tow, or alone. And throughout, again and again, the women will be tested—by their families, lovers, society, and one another—as they fight to live authentic lives.
A genre-defining novel and De Robertis's masterpiece, Cantoras is a breathtaking portrait of queer love, community, forgotten history, and the strength of the human spirit. At once timeless and groundbreaking, Cantoras is a tale about the fire in all our souls and those who make it burn.

Carolina De Robertis: CAROLINA DE ROBERTIS is a writer of Uruguayan origins and the author of The Gods of Tango, Perla, and the international best seller The Invisible Mountain. Her novels have been translated into seventeen languages and have garnered a Stonewall Book Award, Italy's Rhegium Julii Prize, a National Endowment for the Arts Fellowship, and numerous other honors. She is also a translator of Latin American and Spanish literature and editor of the anthology Radical Hope: Letters of Love and Dissent in Dangerous Times. In 2017, the Yerba Buena Center for the Arts named De Robertis on its 100 List of "people, organizations, and movements that are shaping the future of culture." She teaches at San Francisco State University and lives in Oakland, California, with her wife and two children.