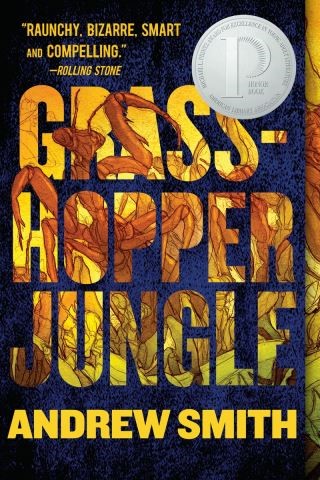 This is the truth. This is history.
It’s the end of the world. And nobody knows anything about it.
You know what I mean.

Funny, intense, complex, and brave, Grasshopper Jungle brilliantly weaves together everything from testicle-dissolving genetically modified corn to the struggles of recession-era, small-town America in this groundbreaking coming-of-age stunner.

Andrew Smith: Andrew Smith is the award-winning author of several young adult novels, including the critically acclaimed Winger and The Marbury Lens. He is a native-born Californian who spent most of his formative years traveling the world. His university studies focused on Political Science, Journalism, and Literature. He has published numerous short stories and articles. Grasshopper Jungle is his seventh novel. He lives in Southern California. You can learn more at authorandrewsmith.com and follow him on Twitter: @marburyjack.