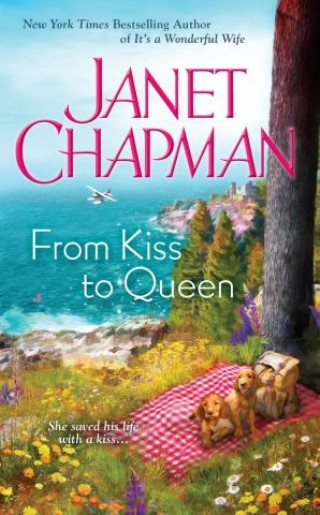 From Kiss to Queen

A new romance from the New York Times bestselling author of the Spellbound Falls novels...

Jane Abbott knows that she's nobody special, so instead of looking for romance she's hunting partridge in the Maine woods when a plane crashes into a nearby pond. Diving in to save the pilot, Jane instinctively gives him air by way of a lifesaving kiss, and leads him to safety through a barrage of gunfire.

The handsome stranger returns the favor by kidnapping her.

Clearly no ordinary man, and insisting Jane's life is in danger, Mark spirits his stubborn guardian angel to an aircraft carrier in the Atlantic Ocean. Only then does she discover that the mysterious Mark is actually Prince Markov Lakeland.

Soon to be crowned king of the young country of Shelikova, can Mark persuade Jane that she has what it takes to be his queen?

When she’s not writing, Janet and her husband are camping, hunting, fishing, and generally rubbing elbows with nature.