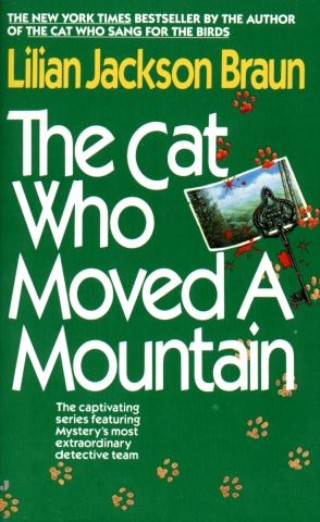 The Cat Who Moved a Mountain

A murder in the mountains has Jim Qwilleran and his cats Koko and Yum Yum feeling on edge in this mystery in the bestselling Cat Who series.

Qwill’s on top of the world when he rents a house on Big Potato Mountain. The owner, J.J. Hawkinfield, brought real estate development to the once-peaceful Potatoes. But Hawkinfield paid a steep price for his enterprise: He was pushed off a cliff by an angry mountain dweller. Qwilleran, however, suspects the man is innocent—and Koko’s antics have him convinced something’s wrong. He may be making a mountain out of a molehill...but he’s determined to find the truth. Even if it means jumping out of the frying pan and into the fire!

Lilian Jackson Braun: The history of Lilian Jackson Braun is perhaps as exciting and mysterious as her novels. Between 1966 and 1968, she published three novels to critical acclaim: The Cat Who Could Read Backwards, The Cat Who Ate Danish Modern, and The Cat Who Turned On and Off.  In 1966, the New York Times labeled Braun, “the new detective of the year.” Then, for reasons unknown, the rising mystery author disappeared from the publishing scene. It wasn’t until 1986 that Berkley Publishing Group reintroduced Braun to the public with the publication of an original paperback, The Cat Who Saw Red. Within two years, Berkley released four new novels in paperback and reprinted the three mysteries from the sixties. Since then, G.P. Putnam’s Sons has published seventeen additional novels in the Cat Who series. Braun passed away in 2011.