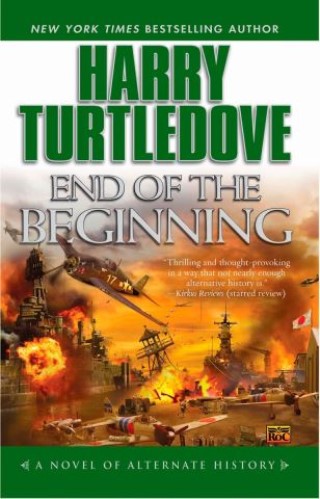 End of the Beginning

Six weeks ago, Imperial Japanese military forces conquered and occupied the Hawaiian Islands. A puppet king sits on Hawaii’s throne, his strings controlled by the general of the invasion force. American POWs, malnourished and weak, are enslaved as hard laborers until death takes them. Civilians fare little better, struggling to survive on dwindling resources. And families of Japanese origin find their loyalties divided.

Meanwhile, across the United States, from Pensacola, Florida, to San Diego, California, the military is marshaling its forces. Steel factories and fuel refineries are operating around the clock. New recruits are enlisting, undergoing rigorous training exercises. All for the opportunity to strike back and drive the enemy from American soil…

Harry Turtledove: Harry Turtledove—the New York Times bestselling author of numerous alternate history novels, including The Guns of the South, How Few Remain, and the Worldwar quartet—has a Ph.D. in Byzantine history. Nominated numerous times for the Nebula Award, he has won the Hugo, Sidewise, and John Esthen Cook Awards. He lives with his wife and children in California.