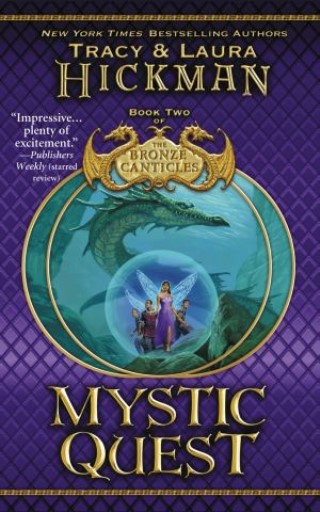 Book Two of The Bronze Canticles

Thrice upon a time, three worlds were in peril... New York Times bestselling author Tracy Hickman and DragonlanceTM cocreator Laura Hickman present the continuing story of their monumental, enthralling epic fantasy... Thrice upon a time, three champions will find one destiny... In the course of more than two decades, Galen Arvad's tiny band of outlaw Mystics has grown into a nation of secret clans, despite fierce persecution by the Pir theocracy and the dragons that have enslaved humanity. On another world, the faery Dwynwyn saved her people by raising an army of the dead, but now none of the corpses can rest...and the sheer number of their tormented legions threatens the faery kingdoms. While on the third world, the tyrannical King Mimic's domination is threatened by a warrior maiden whose thirst for conquest exceeds his own. Yet through the magic of the dreams that link their worlds, a new wind blows, beckoning each of them into unknown lands with the promise of salvation, sanctuary, and power. For Galen's war-weary son, Caelith, the slender hope takes the form of a stranger's vow to lead him and his people to the sanctuary of a lost empire-the legendary ancestral home of the Mystics. Dwynwyn seeks salvation of her people through a small fellowship of Fae who must journey to a distant land of unquenchable horror-where their truth can bring peace to the living and the dead. As for the wizard-goblin Thux, newly and unwillingly appointed Technomancer to King Mimic, his journey to the Ogre citadel may bring him to the height of power and danger-if his own allies do not kill him first. Now three bands of heroes embark on odysseys beset by outer tragedy and inner betrayal. For each to survive, all must succeed-for all three worlds face the same cunning evil...