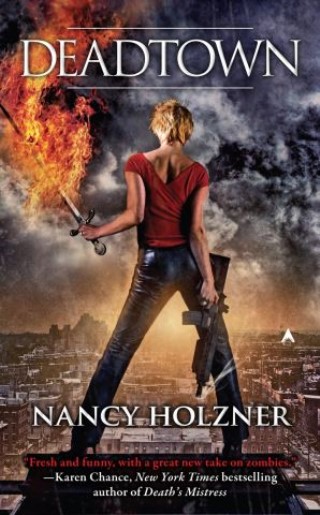 First in a brand new urban fantasy series that's "fresh and funny, with a great new take on zombies" (Karen Chance) and "full of dangerous magic and populated with characters so realistic, they almost jump off the page" (Ilona Andrews).

They call it Deadtown: the city's quarantined section for its inhuman and undead residents. Most humans stay far from its borders-but Victory Vaughn, Boston's only professional demon slayer, isn't exactly human.

Nancy Holzner: Nancy Holzner grew up in western Massachusetts with her nose stuck in a book. This meant that she tended to walk into things, wore glasses before she was out of elementary school, and forced her parents to institute a “no reading at the dinner table” rule. It was probably inevitable that she majored in English in college and then, because there were still a lot of books she wanted to read, continued her studies long enough to earn a masters degree and a Ph.D.

She began her career as a medievalist, then jumped off the tenure track to try some other things. Besides teaching English and philosophy, she's worked as a technical writer, freelance editor and instructional designer, college admissions counselor, and corporate trainer.

Nancy lives in upstate New York with her husband Steve, where they both work from home without getting on each others nerves. She enjoys visiting local wineries and listening obsessively to opera. There are still a lot of books she wants to read.