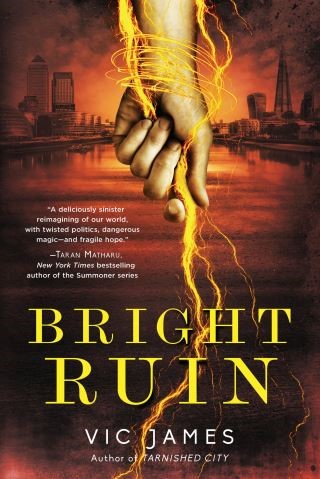 In the “thrilling conclusion”* to the dystopian trilogy that began with Gilded Cage and Tarnished City, the people of Britain rise up against their magically gifted masters. They must break the system—or be broken.

The rules are simple, the system cruel: the lower classes must give ten years in service to Britain’s powerfully gifted rulers. With one uprising crushed by the glittering elite, commoners and aristocrats alike now take sides for a final confrontation.

At the center of it all are two ordinary siblings: Abi Hadley and her brother, Luke. Each has reason to hate the ruling Jardine family. Abi, who was once their servant, now seeks revenge for a terrible wrong. Luke was imprisoned on their whim—but his only hope may be an alliance with the youngest and most powerful of the clan, the cold and inscrutable Silyen Jardine.

Risking everything to end a bright and shining tyranny, Abi, Luke, and Silyen find themselves bound by a single destiny. Their actions will change their fates—and change the world. But at a cost almost too terrible to contemplate.

What price would you pay for freedom?

“Fast-paced, entertaining, and a satisfying end to an epic story [with] dramatic class division based not on mere financial wealth but on a family’s magic.”—Booklist

“A triumphant conclusion to this outstanding fantasy series . . . It will keep you up at night until you finish it, and you’ll take a huge breath as you can’t believe the story is over. If you haven’t read the first two installments, please do so, and then jump into the finale. You’ll fly through them all as you see Britain as you’ve never imagined—and you’ll hope against hope for the freedom that may never come.”—Bookreporter

“Rebellion comes to a deadly boil in the final chapter of James’s Dark Gifts alternate history fantasy trilogy (after Tarnished City). . . . [An] intricate tale of ruthless scheming and bloody betrayals backlit by an unquenchable glimmer of hope.”—Publishers Weekly

Vic James: Vic James is the author of Gilded Cage, which was shortlisted for the Compton Crook award and was a World Book Night 2018 pick, and its sequels Tarnished City and Bright Ruin. A current-affairs TV director who loves stories in all their forms, she has covered the 2016 U.S. presidential election and Britain’s EU referendum for BBC1 and has twice judged The Guardian’s Not the Booker Prize. She has lived in Rome and Tokyo, and currently lives in London.