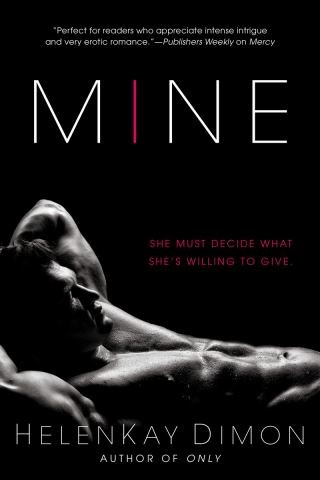 Praised for her “hot and bold”(Kirkus Reviews), the author of Only and Mercy now delivers her most daring novel yet…

She doesn’t depend on anyone for anything. He intends to make her his completely.

Natalie Udall thought her position at the CIA was secure—until protecting her team earned her an armed escort into certain danger. Natalie can’t stand the idea of being secreted away in a cabin in the middle of nowhere, especially since it means sharing close quarters with the controlling bodyguard enlisted to keep her alive.

Gabe MacIntosh joined the military to support his son, trained as a sniper and dealt with death on a regular basis. Now retired and operating a security firm, his first assignment is to protect a CIA agent on the run. She’s strong willed and difficult—and all Gabe can think about is exerting his domination and stripping her of every expectation she has.

Natalie has no intention of giving in to Gabe’s straightforward demands of dominant sex with no attachments—even though the very idea of giving up control thrills her like nothing ever has...

HelenKay Dimon: HelenKay Dimon spent the years before becoming a romance author as a divorce attorney—not the usual career transition. Now she writes full-time and she’s much happier. The author of more than thirty novels, novellas, and short stories that have twice been named “Red-Hot Reads” and excerpted in Cosmopolitan, she’s on the board of directors of the Romance Writers of America and teaches fiction writing at UC San Diego and MiraCosta College.