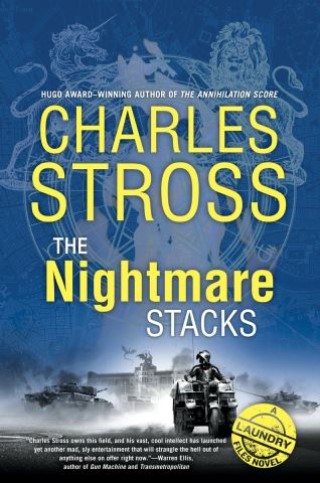 After stumbling upon the algorithm that turned him and his fellow merchant bankers into vampires, Alex Schwartz was drafted by the Laundry, Britain’s secret counter-occult agency that’s humanity’s first line of defense against the forces of darkness. Dependent on his new employers for his continued existence—as Alex has no stomach for predatory blood-sucking—he has little choice but to accept his new role as an operative-in-training.

For his first assignment, Alex is dispatched to Leeds to help assess the costs of renovating a 1950s Cold War bunker for use as the Laundry’s new headquarters. Unfortunately, Leeds is Alex’s hometown, and the thought of breaking the news to his parents that he’s left banking for the Civil Service, while hiding his undead condition, is causing him more anxiety than learning how to live as a vampire secret agent preparing to confront multiple apocalypses.

Alex’s only saving grace is Cassie Brewer, a drama student appearing in the local goth festival who is inexplicably attracted to him despite his awkward personality and massive amounts of sunblock.

But Cassie has secrets of her own—secrets that make Alex’s nightlife behaviors seem positively normal...

Charles Stross: Charles Stross, born in 1964, is a full-time science fiction writer and resident of Edinburgh, Scotland. He is the author of seven Hugo-nominated novels, including Accelerando, Neptune’s Brood, Saturn’s Children and The Laundry Files series, and winner of three Hugo Awards for best novella. Stross has had his work translated into more than twelve languages. He has worked as a pharmacist, software developer, and tech-industry journalist.