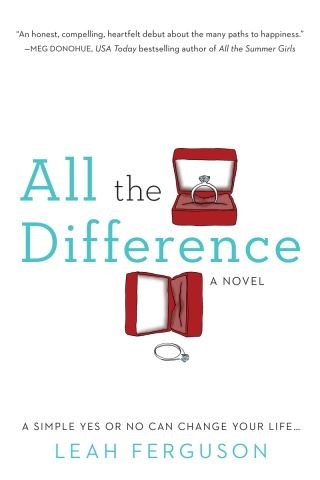 New Year’s Eve. A time for resolutions. A chance to make a change. And for thirty-year-old Molly Sullivan, a night that will transform her life forever…

All it takes is one word—yes or no—to decide Molly’s future. As the clock counts down to midnight and the ball slowly begins to drop, Molly’s picture-perfect boyfriend gets down on one knee and asks her to marry him. She knows she should say yes, especially considering the baby-sized surprise she just discovered she’s carrying. But something in her heart is telling her to say no…

Now, Molly’s future can follow two very different paths: one where she stays with her baby’s father, despite her misgivings and his family’s unreasonable expectations, and one where she ventures out on her own as a single mother, embracing all the hardships that come with it.

And by the time the next New Year is rung in, Molly will know which choice was right—following her head or listening to her heart…

Leah Ferguson: Leah Ferguson holds a BA in English Literature and Russian Language from West Chester University, and a MA from Notre Dame of Maryland University. She began her career as a managing editor for a national law book publisher before leaving to teach English for Maryland and Pennsylvania public high schools and Immaculata University. Leah also contributed to the Pulitzer Prize–winning Harrisburg Patriot-News, writing from the perspective of a newlywed urban expatriate adjusting to life in the suburbs. After the birth of her first child, she left teaching to focus on writing fiction. Leah posts quirky and often sentimental personal essays to her blog, One Vignette, and founded a Tumblr called What Duchess Kate Isn’t Doing. She lives in Pennsylvania with her husband, three young children, dog, and tailless cat. All the Difference is her first novel.