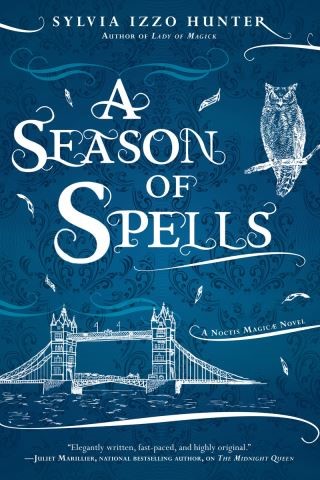 A Season of Spells

In the latest novel from the author of Lady of Magick, Sophie and Gray Marshall must save the Kingdom of Britain from a tide of dark magic...

Three years after taking up residence at the University of Din Edin, Sophie and Gray return to London, escorting Lucia MacNeill, heiress of Alba, to meet the British prince to whom she is betrothed. Alas, sparks fail to fly between the pragmatic Lucia and the romantic Prince Roland, and the marriage alliance seems to be on shaky ground.

Sophie tries to spark a connection between Roland and Lucia by enlisting them both in her latest scheme: reopening the mysterious and long-shuttered women’s college at Oxford. Though a vocal contingent believes that educating women spells ruin, Sophie and her friends dream of rebuilding the college for a new generation of women scholars.

But the future of the college—and of the kingdom—are imperiled when the men who tried to poison King Henry escape from prison and vanish without a trace. Sophie and Gray will need all their strength and ingenuity—and the help of friends both present and long past—to thwart the enemy at Britain’s gates.

Sylvia Izzo Hunter: Sylvia Izzo Hunter is the author of the Noctis Magicae novels, including Lady of Magick and The Midnight Queen. When not writing, she works in scholarly journal publishing, sings in two choirs, reads as much as possible, knits hats, and engages in experimental baking.