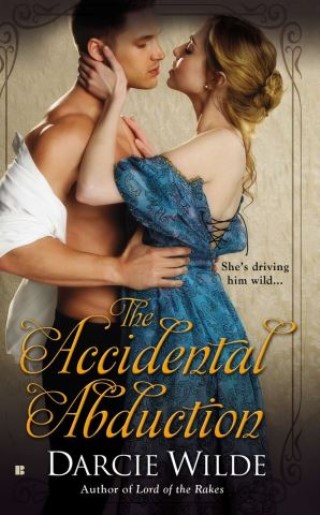 ~One of Publishers Weekly's "Most Anticipated Books of Fall 2014"

A headlong flight across London to stop an elopement leads to a hasty wedding between strangers....A sizzling new romance for fans of Sarah MacLean and Elizabeth Hoyt.
Harold Rayburn is about to be taken for the ride of his life…
After having his proposal rejected by a beautiful but flighty woman, Harry vows he is done with unpredictable and impetuous women for good. Until beautiful and fierce Leannah Wakefield barrels into his life, inadvertently kidnapping him while on a wild carriage ride and leaving him all too eager to get back in the saddle…
Leannah would sacrifice everything to protect her family. So upon hearing of her sister’s intended elopement, she races across London to stop the ill-advised ceremony before it can happen. However, when her mad journey picks her up an unlikely stowaway, one who ignites her desire beyond all reason, she’s the one who ends up hastily wedding a handsome and secretive stranger.
But as Leannah and Harry immediately encounter opposition, jealousy, and suspicion of their hurried nuptials, they begin to doubt that their unquenchable passion can truly lead to a happy marriage—especially when both the bride and groom have devastating secrets to hide…
~"Scintillating" --Publishers Weekly (starred review)

Darcie Wilde: A longtime resident of the Great Lakes State, Darcie Wilde writes her sizzling-hot romances in Ann Arbor, Michigan. She is the author of Lord of the Rakes and The Accidental Abduction. When not actually writing, she lives out her own happily-ever-afters with her husband of fifteen years, one rapidly growing son, one cat, and one writer’s group of infinite patience.