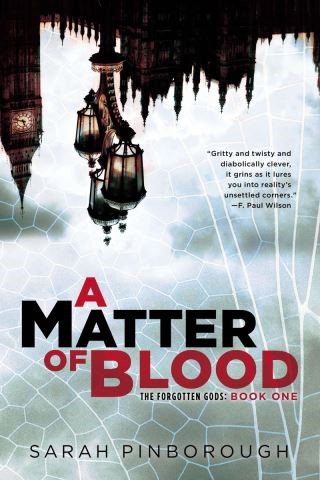 A Matter of Blood

The Forgotten Gods: Book One

In a world steeped in darkness, a new breed of evil has fallen…

London’s ruined economy has pushed everyone to the breaking point, and even the police rely on bribes and deals with criminals to survive. Detective Inspector Cass Jones struggles to keep integrity in the police force, but now, two gory cases will test his mettle. A gang hit goes wrong, leaving two schoolboys dead, and a serial killer calling himself the Man of Flies leaves a message on his victims saying “nothing is sacred.”

Then Cass’ brother murders his own family before committing suicide. Cass doesn’t believe his gentle brother did it. Yet when evidence emerges suggesting someone killed all three of them, a prime suspect is found—Cass himself.

Common links emerge in all three cases, but while Cass is finding more questions than answers, the Man of Flies continues to kill...

Sarah Pinborough: Sarah Pinborough is a British author of dark fantasy, horror, thriller and YA who has had more than ten novels published thus far across that range. Her short stories have appeared in several anthologies and she has a horror film in development. She has recently branched out into television writing and is currently writing for the BBC. Sarah was the 2009 winner of the British Fantasy Award for Best Short Story, and has three times been short-listed for Best Novel. She has also been short-listed for a World Fantasy Award. Her novella, The Language of Dying was short-listed for the Shirley Jackson Award and won the 2010 British Fantasy Award for Best Novella.