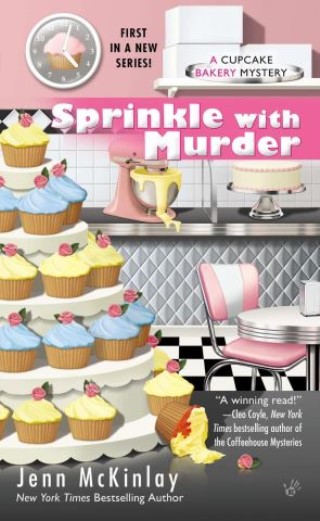 Melanie Cooper and Angie DeLaura are finally living out their dream as the proud owners of the Fairy Tale Cupcakes bakery. But their first big client is a nightmare. She's a bridezilla who wants 500 custom cupcakes for her wedding.

When Mel stumbles upon the bride-to-be dead-by-cupcake, she becomes the prime suspect. To save themselves and their business, the ladies need to find the real murderer, before the cupcake killer ices someone else.

Jenn McKinlay: The hardest decision New York Times bestselling author Jenn McKinlay ever had to make was what to major in during college. Then she discovered the sanctuary of the library and library science—a major that allowed her to study all the subjects. She loves working as a librarian. After all, what other occupation allows you to research the ethnobotanical properties of agave, perform a puppet show for twenty wiggly toddlers and try to answer why the rabbit’s foot is considered lucky, all in the same day? Jenn is also the author of the Cupcake Bakery Mysteries, the Hat Shop Mysteries and the Bluff Point romance series. She lives in Scottsdale, Arizona, in a house that is overrun with books, pets, kids and her husband’s guitars.