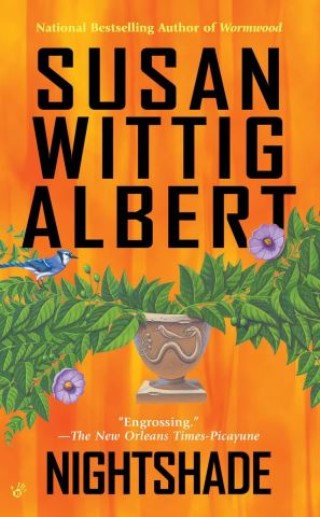 New York Times bestselling author Susan Wittig Albert takes China Bayles on a trip down memory lane, where one fresh murder and several cold cases force her to face her dark past…

China’s herb shop and catering business may be thriving, but she’s still reeling from her father’s death—and isn’t remotely interested in her half-brother Miles’s investigation of it. Although, when fate forces her to get involved, China realizes it’s time to bring the past to light—or else it will haunt her the rest of her life.

But China and McQuaid discover that Miles may have been keeping as many secrets as he seemed determined to uncover—for starters, knowledge of the whereabouts of their father’s wrecked car, a key piece of evidence. How deep do the layers of secrecy go? And who has a stake in concealing the truth after sixteen years?

Piecing together clues, China and McQuaid embark on a wild goose chase, tracking down evidence that might link several cold-case murders to her father’s death. But the closer they get to untangling the story, the more China longs for answers she may never get...

Susan Wittig Albert: Susan Wittig Albert grew up on a farm in Illinois and earned her Ph.D. at the University of California at Berkeley. A former professor of English and a university administrator and vice president, she is the author of the China Bayles Mysteries, the Darling Dahlias Mysteries, and the Cottage Tales of Beatrix Potter. Some of her recent titles include Widow’s Tears, Cat’s Claw, The Darling Dahlias and the Confederate Rose, and The Tale of Castle Cottage. She and her husband, Bill, coauthor a series of Victorian-Edwardian mysteries under the name Robin Paige, which includes such titles as Death at Glamis Castle and Death at Whitechapel.