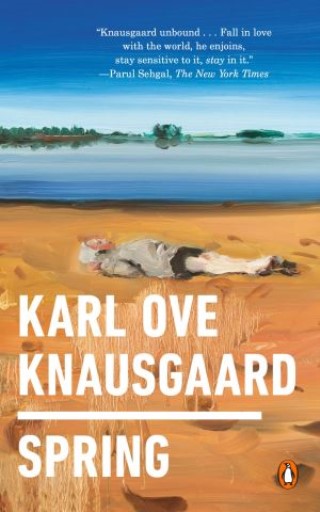 “Spring features Knausgaard unbound, writing for the first time without a gimmick or the crutch of extravagant experimentation…Fall in love with the world, he enjoins, stay sensitive to it, stay in it.”
-The New York Times

"Poignant and beautiful…Even if you think you won’t like Knausgaard, try this one and you’ll get him and get why some of us have gone crazy for him."
—Los Angeles Review of Books

So begins Spring, the recommencement of Knausgaard’s fantastic and spellbinding literary project of assembling a personal encyclopedia of the world addressed directly to his newly born daughter. But here Knausgaard must also tell his daughter the story of what happened during the time when her mother was pregnant, and explain why he now has to attend appointments with child services. In order to keep his daughter safe, he must tell a terrible story, one which unfolds with acute psychological suspense over the course of a single day.

Utterly gripping and brilliantly rendered in Knausgaard’s famously sensitive, pensive, and honest style, Spring is the account of a shocking and heartbreaking familial trauma and the emotional epicenter of this singular literary series.

Karl Ove Knausgaard: Karl Ove Knausgaard’s first novel, Out of the World, was the first ever debut novel to win the Norwegian Critics’ Prize and his second, A Time for Everything, was widely acclaimed. The My Struggle cycle of novels has been heralded as a masterpiece wherever it has appeared, and the first volume was awarded the prestigious Brage Prize.