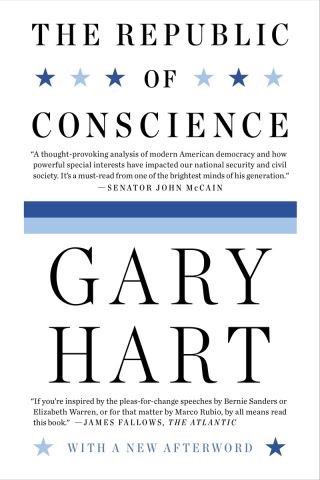 The Republic of Conscience

Former Senator Gary Hart’s The Republic of Conscience is a meditation on the growing gap between the founding principles of the United States Constitution and our current political landscape.

Going back as early as 400 BC, the idea of a true republic has been threatened by narrow, special interests taking precedence over the commonwealth. The United States Constitution was drafted to protect against such corruption, but as Gary Hart details in The Republic of Conscience, America is nowhere near the republic it set out to be almost 250 years ago, falling to the very misconduct it hoped to avoid.

In his latest book, the former Colorado Senator and presidential contender describes ‘the increasing gap between purpose and performance’ in America, emphasizing how the sense of national interest has become distorted and diluted over time. Focusing on the years after World War II, Hart tackles major American institutions—the military, the CIA, Congress—and outlines how these establishments have led the country away from its founding principles, not closer to them.

Full of original and incisive analysis, The Republic of Conscience is Hart’s examination and remedy for the millions of Americans who feel jaded, confused, and disappointed by their current government. A testament to Hart’s political faith in the founding fathers, this book is one citizen’s attempt to recapture the Republic, and a timely reminder for the next July 4th holiday.

Gary Hart: Gary Hart is an American politician and a former Colorado senator, serving in Congress from 1975 to 1987. Since retiring from the Senate, Hart resumed his private law practice and has written several books on U.S. history and politics. In 2014, President Barack Obama named Hart as the new United States Special Envoy for Northern Ireland.