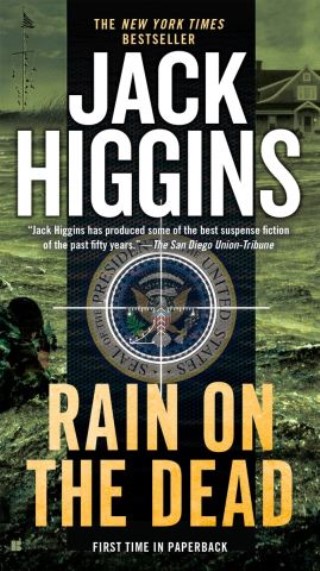 Rain on the Dead

The past comes back to haunt black ops specialist Sean Dillon and his colleagues in this New York Times bestselling novel of terrorism, revenge, and a very old nemesis...

On a dark summer night, two Chechen mercenaries emerge from the waters off Nantucket to kill a high-value target, the former President of the United States. Unfortunately for them, the president has guests that night, including Sean Dillon and his colleague, Afghan war hero Captain Sara Gideon.

The Chechens do not survive the night, but Dillon is curious about how they even got on the island. What he discovers sends a chill through his bones—a name from Dillon’s distant past. If this man is working with the terrorists now, the assassination attempt is only the beginning—and next time, the results may be much, much different.

Jack Higgins: Jack Higgins lives on Jersey in the Channel Islands. The author of dozens of bestsellers, most famously The Eagle Has Landed, he served three years with the Royal Horse Guards in Eastern Europe during the Cold War, and subsequently was a circus roustabout, a factory worker, a truck driver, and a laborer before entering college at age 27. He holds degrees in sociology, social psychology, and economics, and a doctorate in media. A fellow of the Royal Society of Arts, he is an expert scuba diver and marksman.