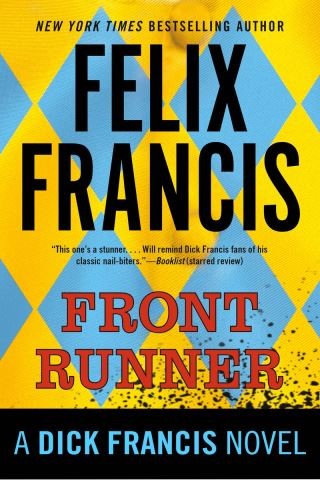 British investigator Jefferson Hinkley is back in this compelling Dick Francis thriller by the New York Times–bestselling author of Crisis.

In his role as an undercover investigator for the British Horseracing Authority, Jeff Hinkley is approached by a multi-time champion jockey to discuss the delicate matter of losing races on purpose. Little does he know that the call will set off a lethal chain of events, including the apparent suicide of the jockey and an attempt on Hinkley’s own life. Never one to leave suspicious events alone, Hinkley begins investigating the jockey and the races he may have thrown. But there are others out there who intend to prevent his inquiry from probing further...at any cost.

Felix Francis: Felix Francis, a graduate of London University, is an accomplished outdoorsman, marksman, and pilot who has assisted with the research of many of his father's novels. The coauthor and author of numerous Dick Francis novels, he lives in England.

Dick Francis was born in South Wales in 1920. He was a young rider of distinction winning awards and trophies at horse shows throughout the United Kingdom. At the outbreak of World War II he joined the Royal Air Force as a pilot, flying fighter and bomber aircraft including the Spitfire and Lancaster. He became one of the most successful postwar steeplechase jockeys, winning more than 350 races and riding for Her Majesty Queen Elizabeth, the Queen Mother. After his retirement from the saddle in 1957, he published an autobiography, The Sport of Queens, before going on to write more than forty acclaimed books. A three-time Edgar Award winner, he also received the prestigious Crime Writers’ Association’s Cartier Diamond Dagger, was named Grand Master by the Mystery Writers of America, and was awarded a CBE in the Queen’s Birthday Honours List in 2000. He died in February 2010, at age eighty-nine, and remains among the greatest thriller writers of all time.