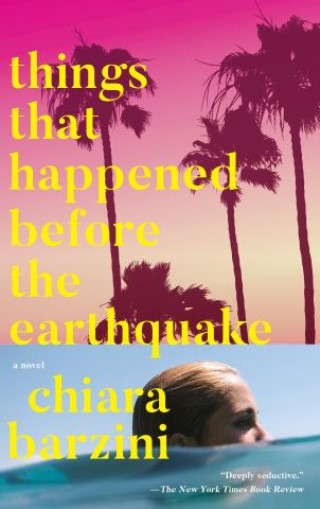 Things That Happened Before the Earthquake

Welcome to LA? Nineties' Hollywood gets an Italian makeover in this poignant and ruefully funny coming-of-age novel featuring a teenage girl who's on shaky ground—in more ways than one.

Mere weeks after the 1992 riots that laid waste to Los Angeles, Eugenia, a typical Italian teenager, is rudely yanked from her privileged Roman milieu by her hippie-ish filmmaker parents and transplanted to the strange suburban world of the San Fernando Valley. With only the Virgin Mary to call on for guidance as her parents struggle to make it big, Hollywood fashion, she must navigate her huge new public high school, complete with Crips and Bloods and Persian gang members, and a car-based environment of 99-cent stores and obscure fast-food franchises and all-night raves. She forges friendships with Henry, who runs his mother's movie memorabilia store, and the bewitching Deva, who introduces her to the alternate cultural universe that is Topanga Canyon. And then the 1994 earthquake rocks the foundations not only of Eugenia's home but of the future she'd been imagining for herself.

Chiara Barzini: CHIARA BARZINI is an Italian screen and fiction writer. She has lived and studied in the United States where she collaborated with Italian Vanity Fair, GQ, XL Repubblica, Rolling Stone Italy, Flair, and Marie Claire while publishing essays in American magazines such as the Village Voice, Harper’s, Vogue, Interview Magazine, Vice, and Rolling Stone. Her fiction has appeared in BOMB Magazine, The Coffin Factory, Noon, The NY Tyrant, Vice, and Dazed & Confused. She is the author of the story collection Sister Stop Breathing(Calamari Press, 2012) and has written a variety screenplays for both television and film. Her most recent film work, Arianna, the coming of age story of an intersex adolescent, won numerous awards at the Venice Film Festival and was nominated for Best Screenplay at the Italian Golden Globes, 2016.