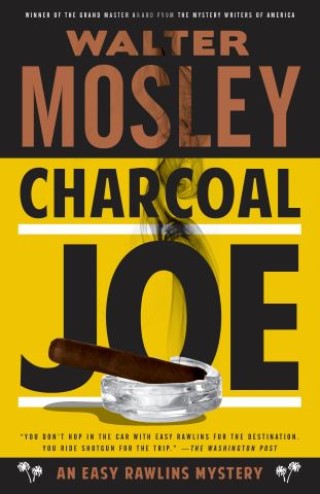 Walter Mosley’s indelible detective Easy Rawlins is back, with a new detective agency and a new mystery to  solve.

Picking up where his last adventures in Rose Gold left off in L.A. in the late 1960s, Ezekiel “Easy” Rawlins finds his life in transition. He’s ready—finally—to propose to his girlfriend, Bonnie Shay, and start a life together. And he’s taken the money he got from the Rose Gold case and, together with two partners, Saul Lynx and Tinsford “Whisper” Natly, has started a new detective agency. But, inevitably, a case gets in the way: Easy’s friend Mouse introduces him to Rufus Tyler, a very old man everyone calls Charcoal Joe. Joe’s friend’s son, Seymour (young, bright, top of his class in physics at Stanford), has been arrested and charged with the murder of a white man from Redondo Beach. Joe tells Easy he will pay and pay well to see this young man exonerated, but seeing as how Seymour literally was found standing over the man’s dead body at his cabin home, and considering the racially charged motives seemingly behind the murder, that might prove to be a tall order.
Between his new company, a heart that should be broken but is not, a whole raft of new bad guys on his tail, and a bad odor that surrounds Charcoal Joe, Easy has his hands full, his horizons askew, and his life in shambles around his feet.

Walter Mosley: Walter Mosley is the author of fifty books, most notably fourteen Easy Rawlins mysteries, the first of which, Devil in a Blue Dress, was made into an acclaimed film starring Denzel Washington. Always Outnumbered, adapted from his first Socrates Fortlow novel, was an HBO film starring Laurence Fishburne. Mosley is the winner of numerous awards, including an O. Henry Award, a Grammy Award, and PEN America’s Lifetime Achievement Award. He has just been named the 2016 Grand Master by the Mystery Writers of America. A Los Angeles native and a graduate of Goddard College, he holds an MFA from the City College of New York and now lives in Brooklyn.