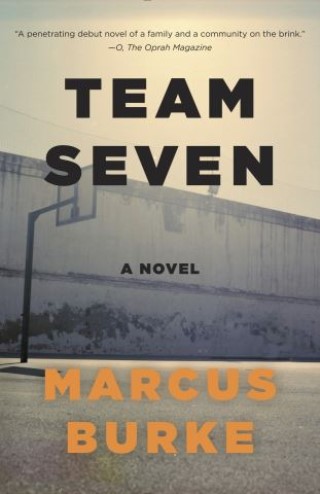 Just south of Boston in Milton, Massachusetts, Andre Battel is growing away from his Jamaican family, discovering genuine prowess on the basketball court, and eventually falling into dealing drugs for the local street gang, Team Seven. But when Andre and his crew fall behind on payments, dire and violent consequences await. Around Andre swirls a cast of characters and voices: Ruby, a hardworking medical secretary; Nina, his older sister; Eddy, his mostly-not-there father; and Reggie and Smoke, the kingpins of competing drug crews. As these individual lives clash and come together, the novel weaves an intricate and unflinching portrait of a black family, a black community, and one young man poised between youthful innocence and ambiguous experience.

Marcus Burke: Marcus Burke grew up in Milton, Massachusetts, just outside of Boston. A standout athlete, he attended prep school at Brimmer and May and was recruited to play basketball at Susquehanna University, where he played varsity for all four years. But a knee injury limited his playing time, so he took up fiction writing instead and was accepted at the Iowa Writers Workshop, where he was awarded a grant in honor of James Alan McPherson from the University of Iowa MacArthur Foundation Fund. He lives in Iowa City, Iowa.